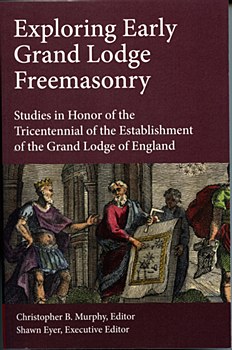 "Exploiring Early Grand Lodge Freemasonry" edited by Christopher B. Murphy and Shawn Eyer. According to Masonic records, the Grand Lodge of England was established June 24, 1717, in London. Soon afterward, Freemasonry, a fraternal society of obscure origins and antiquity, began to spread rapidly throughout and beyond the British Empire. This volume of intriguing essays by eminent and emerging Masonic scholars explores the history and culture of Freemasonry during that period of expansion. What did Masons of the early Grand Lodge era actually do in their lodges? How did these brethren think of themselves and their Craft? What were their motivations and ideals? What was their experience of Freemasonry? By posing such questions, our contributors have been able to study not just an institutional beginning, but the cultural realities of Masonic life in the first decades of the Grand Lodge’s history.