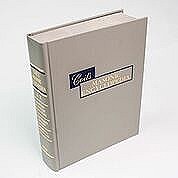 This masterpiece of Masonic knowledge was compiled by Henry Wilson Coil, the late California lawyer, over a twenty-five year period, and the author's preface is dated 1960. In 1995 the revised edition was published, edited by Allen E. Roberts of New Jersey. Both men, 33rd Degrees, are knowledgable experts in their field. This book is considered a classic in fraternal circles. Coil was well-versed in symbolism, and includes entries on jurisprudence, history, and the latest information available on Freemasonry from all parts of the world. Over 1750 articles are discussed from A to Z, plus a Chronology beginning with the 10th century through the 20th, listing important Masonic events and facts in order of occurence.
Sturdy Hardcover edition measures approximately 9 X 11 inches. Revised in 1995 734 pages. Sold elsewhere for over $100!!